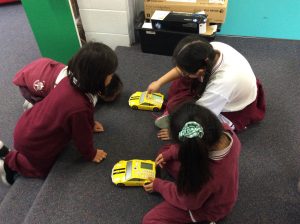 At St. Bernadette’s every year level participates in Robotics lessons. Robotics is a part of the Victorian Curriculum. Computer programming and coding are becoming increasingly important. Programming is a concept that through teaching robotics becomes understandable. It involves designing, creating, building, testing, modifying and creative problem solving. By programming a robot, students learn about science, engineering and maths and get an understanding of how these subjects link together.

In Prep we use BeeBots to teach the students how to control a robot by creating a sequence of steps using directional language.  This is done using arrow buttons on the robot itself. They can either follow programs or create their own

Years 1 and 2 use ProBots, which are controlled via buttons on the robot, but involve altering the distance travelled and how far they turn. The students create their own programs to draw pictures, navigate around a maze, and design programs for others to follow.

Years 3 and 4 use Lego WeDo, which allows the students to collaboratively create a moving robot using motors and sensors, such as a drumming monkey or a snapping crocodile. They program the robot via a drop-and-drag code on a computer. The students use existing programs and by the end of Year 4 are encouraged to try and modify a program to create a new robot.

Years 5 and 6  work on the Lego WeDo and are expected to create and program their own robot based on an existing program. They are introduced to the NXT Mindstorm robots using advanced building and programing. Programing occurs through a drop-and-drag  computer program allowing the students to create their own movements. The NXT robots use touch, sound, colour and light detector sensors and can be customized by students, in terms of physical features and actions.

Coding is a big part of Robotics lessons.  Computers are a huge part of our life and everything that a computer does is controlled by a line of code. Coding strengthens logical thinking and problem-solving skills.  In Robotics the students learn the language of code through apps such as ‘TheFoos’ and ‘Daisy The Dino’ (Juniors), through to ScratchJr and Scratch (for the Middle and Upper Students) where they are encouraged to create their own games and puzzles.  The Senior students also use Swift Playground where they are taught the language of Apple iPads and how to create an app. The students also develop a code to navigate a Sphero robot. These are only a few of the many programs available and used in Robotics.

In Robotics the students learning is personalised, as they work at their own pace and level of skill, and are encouraged to challenge themselves. It is an exciting, hands-on, fun way to learn.